Chef Louis is a chef who is infamous for trying to cook Sebastian in Disney's 1989 film The Little Mermaid, its sequel, its televsion series, and its spin-off featuring Sebastian the Crab. He apparently loves his job, and can be determined to an almost unhealthy extent. He is voiced by Rene Auberjonois.

Eccentric. He is obsessed with cooking and clearly takes great pleasure in it, dancing and spinning around his kitchen while singing about the things he's cooking, while doing things that make the hidden Sebastian want to throw up-but that's probably just because all the dishes involve fish or other sea creatures. He's got a hair-trigger temper, which flares up and causes him to get in trouble with one of the maids when he destroys the kitchen to get Sebastian, who pinched his nose. If the sequel is any evidence, his relationship with Sebastian and the maid has not improved, though he's still in the royal family's employ anyway, and is seen preparing a massive cake for Melody's birthday.

Chef Louis only appeared in two scenes of the first film. He first apeared in the kitchen he cooking fish food for dinner for Ariel as a guest with Prince Eric and Grimsby until Sebastain came to the kitchen to hide till Louis spot on him and chase him round the kitchen and made a mess. At end he appeared at the wedding boat for Prince Eric and Princess Ariel, he once again he started after Sebastian. But Sebastian use claw to cut the rope to stop Louis to hit on his teeth break every teeth but two teeth and Louis fell down.

The Little Mermaid II: Return to the Sea

Louis appears in the film but he only has three scenes one scene where he prepares Melody's birthday cake. He then chases Sebastian around the dance hall after he lands in Melody's cake. In the end of the film he is grabbed by Carlotta and they both jump into the sea.

Occasionally, his rivalry with Sebastian comes up for comedy, but his appearance will always be very brief and usually not really relative to the plot.

He is usually just a background character, but once in a while he'll get a line or two, such as in "Goofy's Magic Menu", when he tries to do a small show in which he tries to cook Sebastian again, and later is asked by Mickey to take over in the kitchen since their cook, Gus the Goose, has eaten all the dinner for that night, but Mickey is told "This cook is booked!" 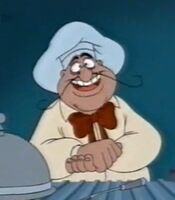 Chef Louis in House of Mouse

Chef Louis in The Little Mermaid II: Return to the Sea

Louis spot his foe Sebastian again in the second movie

Louis gets knocked out by Sebastian.

Louis has his sword out ready to chase Sebastian again.

Louis smiling nervously at Charlotta off screen.
Add a photo to this gallery
Retrieved from "https://fanfictiondisney.fandom.com/wiki/Chef_Louis?oldid=5474"
Community content is available under CC-BY-SA unless otherwise noted.