I have just finished the script of a picture I have entitle "Hakuna Matata", It includes the story and the dialogs as well as the lines of the song “Hakuna Matata”. I have also included the imagines of the characters of the picture “Hakuna Matata” by Disney.

The envelope contains the screenplay, the songs and the images to be sent to Disney Studios.

These gave me the idea and have realized that some couples of this characters could be presented as friends, I have devised them this:

All this Characters traveled to Tokyo in order to meet the young boys and girls and their Digimons (T.K, Kari, Davis, Tai, Patamon, Gatomon, Veemon, Agumon and every more).

All this characters, meaning, Timon, Pumbaa, Pain, Panic, Mushu and Cri Kee, with the young people with their Digimons traveled back to Panama where they were in danger, due to the evil Digimons, in order to save the world.

I have in the movie script and song's lyrics and send to Walt Disney Studios.

The envelope contains the screenplay in the images.

Disney's Hakuna Matata (in the crossover with Digimon) 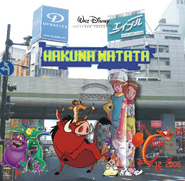 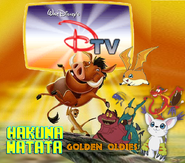 Timon & Pumbaa with Patamon and T.K

Retrieved from "https://fanfictiondisney.fandom.com/wiki/Disney%27s_Hakuna_Matata_(in_the_crossover_with_Digimon)?oldid=7045"
Community content is available under CC-BY-SA unless otherwise noted.