This article is about the character from Finding Nemo. For the villain in Kim Possible, see Gil Moss. For the Cars character, see Gil.

Gill is a character from Finding Nemo.

He is the leader of the fish living inside the dentist Philip Sherman's office fish tank called the Tank Gang. On Gill's first attempt to escape he tried to shoot himself into the toliet. He Missed, and landded on the Gill landed on the dentist's tools, damaging his right fin.

Eventually, Gill helps Nemo escape the office by jumping onto the dentist's mirror to catapult the clownfish into the air so that he lands onto a sink leading to a drain, which leads to the ocean. After Dr. Sherman puts Gill back into the tank, the Tank Gang congratulates him on finally succeeding in helping Nemo return to the ocean.

At the end of the film, Gill and the other Tank Gang members manage to escape from Dr. Sherman's office. Since Dr. Sherman's new AquaScum 2003 has broken, he has to take his fish out, put them in bags, and clean the tank himself, and while he complains to Barbara about the device breaking when it has a lifetime guarantee, Gill and the others make their way out of the office. They are seen having crossed the street and jumped into the ocean to their freedom. 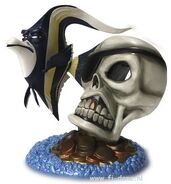 Retrieved from "https://fanfictiondisney.fandom.com/wiki/Gill?oldid=7196"
Community content is available under CC-BY-SA unless otherwise noted.